According to “the Modern theory of polarization”, in a continous-k formulation, the polarizatin \(\mathbf{P}_\text{electron}\) value is \(- f e / (2 \pi)^3\) times the sum of valence-band Berry phase. On another note, Wannier charge center can be conveniently linked to the Berryphase of valence band via a Fourier transformation. Thus, we should be able to calculate the ferroelectric polarization using Wannier interpolation of Bloch bands.

We need both centro symmetric and non-centro Ferroelectric structure. 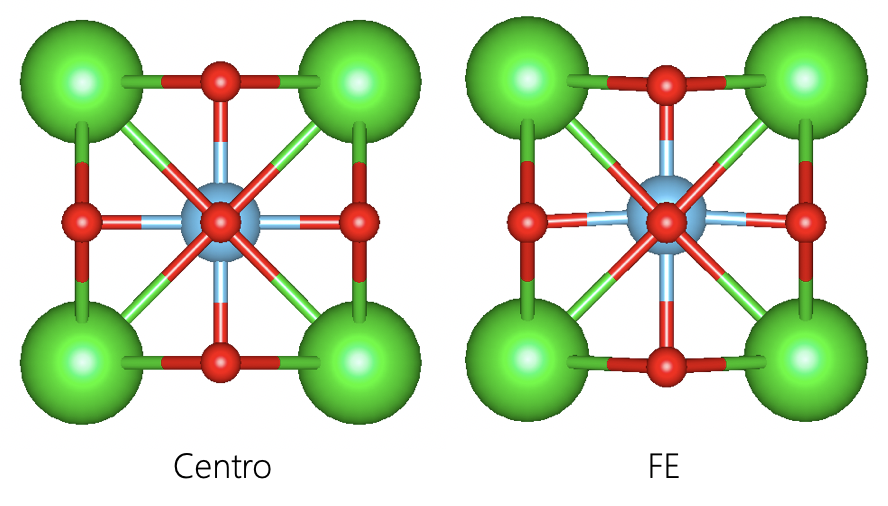 To get polarization value using VASP, just add the following line to your SCF(static) calculation’s INCAR:

In the OUTCAR file, you will find a block like the following:

For the result, I refer back to one of my previous post:

By varying the atomic displacement from the centrosymmetric phase (CENT) to ferroelectric one (FE). VASP produce a series of ionic and electronic contribution to the total dipole moment.

we can easily calculate its ionic dipole moment at centrosymmetric phase should be -12.09 elect*A.
After figuring out which value is clearly wrong, we can now proceed to calculate total polarization:

In this section, I will introduce the usage of VASP2WANNIER90 interface as well as a general method to construct the valence band’s Wannier functions.

We need fat band analysis in order to get a sense of how our valence band are composed. Here, for the sake of simplicity, I’ll skip it and the reader should feel free to to calculate these on their free time.

The result should coincide with our chemical intuition. From the electron configurations, we can see that:

which means, our valence bands are composed by:

Since we have a set of isolated valence bands, we can exclude the conduction bands by adding:

Other information such as cell vectors, atom’s positions, k-points can be written automatically by VASP.

Furthermore, I added num_iter = 0 to use projection only scheme.

Then run WANNIER90 by:

and it will generate wannier90.out file. Near the end of that file, there should be a block that look like the following:

those three data between parentheses are the Wannier Charge Centers:

And that, my friend, is all the technical details you need to know to calculate the Wanneir charge centers.

According to “the modern theory of polarization”, the macroscopic polarization can only be obtained by subtracting the centrosymmetric phase’s dipole moment from the Ferroelectric one. Here, I’ll do a little trick to circumvent this and eventually show you how everything fits back together.

Calculate the polarization without centrosymmetric phases

To calculate the electronic contribution to the polarization, just sum each Wannier Charge Centers and then multiply if by a spin-degenerate factor $2$:

To calculate the ionic contribution to the polarization, first find each ions core charges (positive), then multiply the atomic position (here, along z axis) by it and sum up the data:

since $\mathbf{r}$ and $\mathbf{R}$ are vectors, in order to get the total polarization, we have to do this on three Cartesian axes and then add them up using vector summation. Here, we only care about the polarization at Z axis, so I’ll just ignore other axes’ contributions. My results are as follow (note the minus sign in Ionic part is due to electrons having negative charge):

This value is drastically large than the one we get using Berryphase method so there must be something wrong!

Where N equals to some integer number that represent the number of electron get involved.

Taking a closer look at our structures, the FE one has one oxygen at ~$3$ Å while it goes to $0$ Å in the centrosymmetric phase (see picture below). An atom moving $3$ Å during phase transition is generally speaking not possible!

Intuitively, one may think “OK, thats alright, we have periodic boundary, so we only have to move this atom up-wards to the boundary.” Yes, this is indeed the case, but our method cannot deal with this, and that is why the polarization quantum is always linked with the lattice parameters and the polarization curve (displacement vs polarization) is multi-valued.

To solve this, we can simply subtract one lattice parameter Z from the atomic position as well as the corresponding Wannier Charge Centers, we get (again, note the minus sign in Ionic part is due to electrons negative charge sign):

This way, our polarization calculated via Wannier functions is almost identical to our Berryphase’s result.

Calculate the polarization with centrosymmetric phases

If we stick with the method described above, finding what went wrong can be tedious if not impossible for larger systems, especially when you are confused about which Wannier function belongs to which atom.

Don’t be afraid! There is another way of dealing with the polarization quantum. Remember what we did to the centrosymmetric phase? Yep, we ignored it because its polarization is zero and zero doesn’t seem to be that interesting. However, even though the overall dipole moment of the centrosymmetric phase is zero, each orbital associated with atoms still have Wannier charge centers and we can use those Wanneir charge centers as a “homing beacon” to determine which cell should the same Wannier charge centers located in the ferroelectric phase.

I’ll leave this to the reader to use this method to calculate the polarization value.

WARNING The sign convention for the ionic part is very important. Please, for the love of god, remember change dot the dipole moment of each structure’s result with a minus sign and ADD it to the electronic part (so that they are both in elect * A). And remember to flip the sign of the final result (in C/M^2).

The calculation of the macroscopic electric polarizations can have many pitfalls, and almost all of them are related to the polarization quantum. So, check your structures, make sure no ions jump over the boundary!

I’ve put all input file in a zip file for download: VASP.