The VASP and QE both have berry phase module that calculate the electronic polarization “automagically”. However, their results always seem to be puzzling, especially for low dimensional systems. In order to get a clear picture of how to these routine perform in 2D systems and to show how to use them correctly, a 2D NbN system and a 3D BaTiO3 structure were employed here as an example. To confirm their results, a charge-center method was also employed.

Before diving into things, let review some basic concepts that are of paramount importance to later calculations.

According to the modern theory of polarization, the electrical polarization depends on the difference of dipole moment between centro-symmetric structure and non-centro-symmetric stucture. The reason behind is that the polairzation cannot be uniquely determined due to periodical boundary conditions.(That is, translation of unitcell vector can yield unphysical movements in the charge centers.)

To illustrate this, first, consider a imaginary one dimensional atomic chain that have two differenc atoms: a anion and a cation.

We can easily determine the dipole moment pointing from the anion to the cation.

However, the physical world does not work in such simple way. If we take a step further, differentiate the electrons and ions, the problem becomes much harder to solve:

And the positive charge center can be found:

These expressions are easy to solve, but the charge-center varies with the choice of unicell. For example, if we translate the unitcell by a fraction to the right:

Taking a closer look at the charge distribution, some of which “jumped” from the left end to the right end due to periodical conditions. And even though the structure is unchanged, this translation motion changes the charge center of electrons while left the ion center unaffected.

Side Note: how to define a centrosymmetric phase?

2D-NbN, as an out of plane ferroelectric system suggested by Anuja et al, have exotic switchable out-of-plane (OOP) polarization which can happen without switching of ionic positions. I choose this to show how Berry phase method can, sometimes, be cumbersome and have boundaries in certain systems.

The system consist of one Nb and one N atom that forms a Boron Nitride like structure. The polarization can be switched by switching the \(\Delta\) in the z axis:

Due to the fact that this structure possess OOP polarization in which the periodical conditions are broken, the charge center can be uniquely defined since the charge density reverts to zero at the vacuum region.

The vacuum region is chosen as around 30 Angstrom with an atrifical dipole layer so that imaging counterpart has no effects. 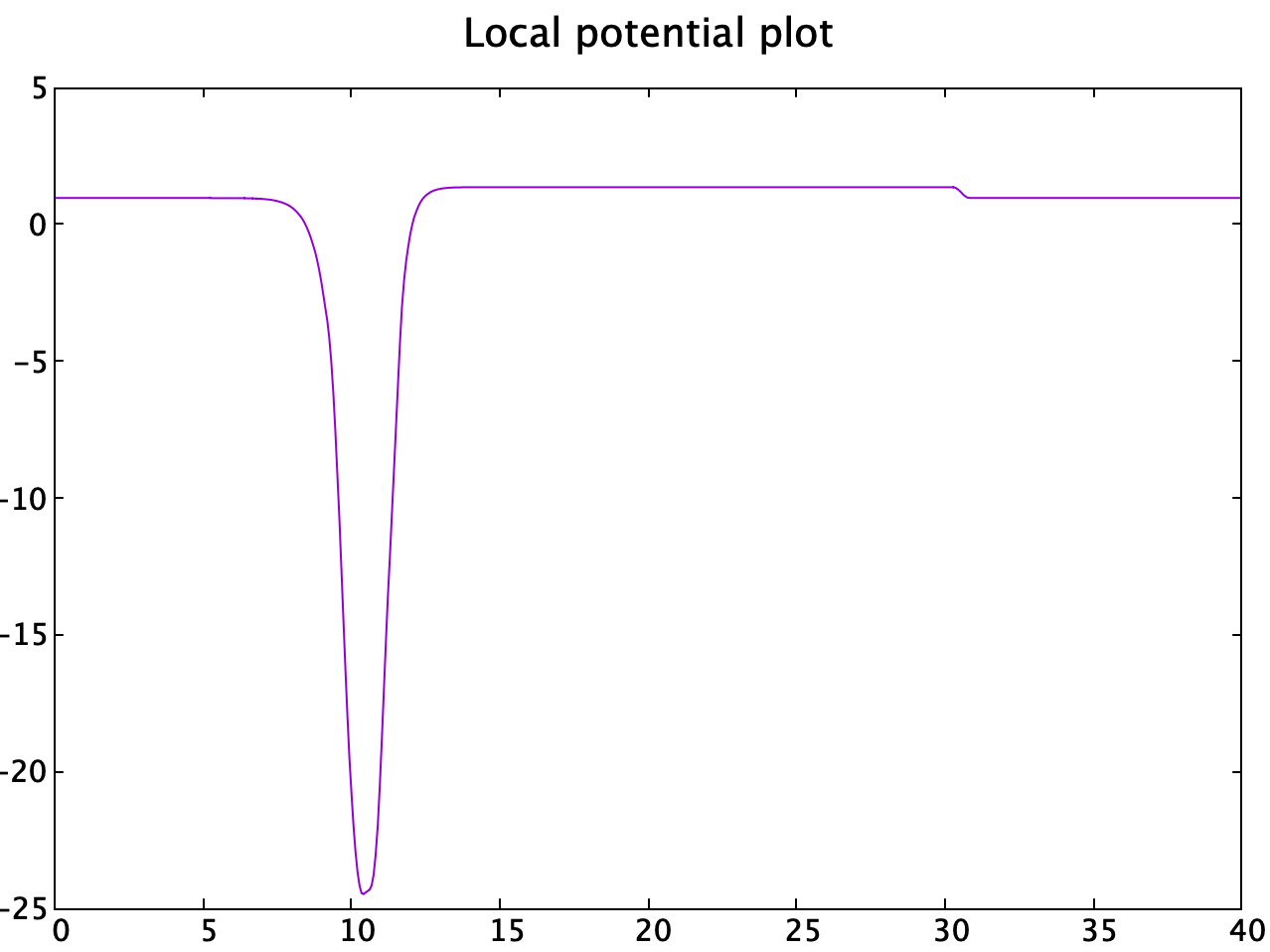 The charge center method is performed using this tool (

link). The final polarization obtained for intrinsic NbN monolayer is:

And the transition curve is obtained almost identical to the published result: 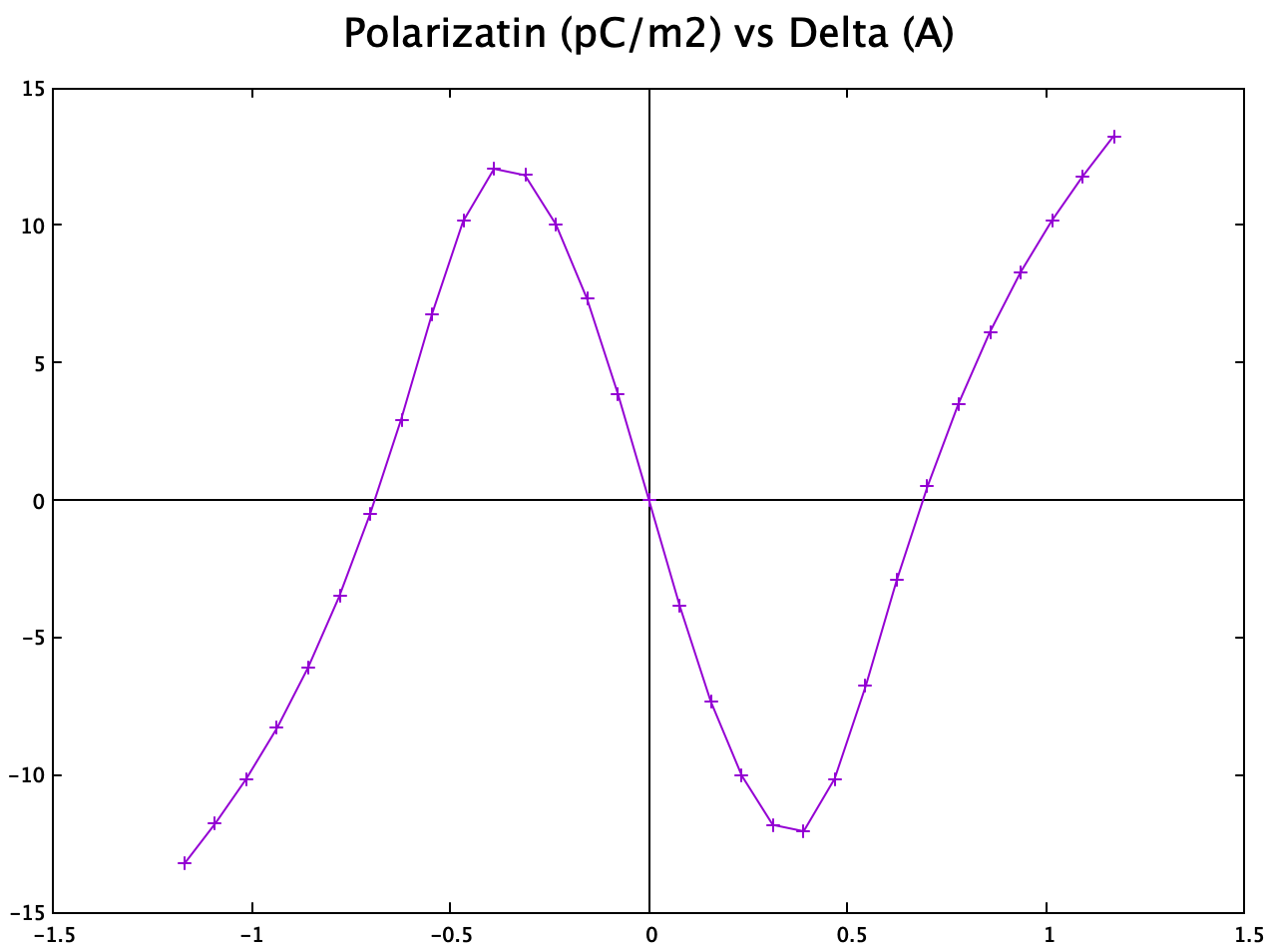 This confirms the “correctness” of my charge center method even though in paper they used the berryphase method.

To avoid error as mentioned in

link, I performed both automatic and manual berryphase calculation using the tag:

The final results does not make sense as:

No matter how I tried: a different K-points, a different DIPOL value … the p[elc] does not change and stays at around 30 e*Angst. One thing that I notice: changing DIPOL tag greatly affects the convergence (mostly due to add in dipole corrections) and p[ion] value. But it does absolutely nothing to p[elc] which is puzzling.

As of now, I don’t know how to use VASP’s berry phase routine to calculate electronic polarization on the non-periodical direction (OOP).

So, what about periodical directions?

By varying the atomic displacement from the centrosymmetric phase (CENT) to ferroelectric one (FE). VASP produce a series of ionic and electronic contribution to the total dipole moment.

It is clear that the centrosymmetric one has a wrong ionic contribution to the total polarziation.

At first, I thought this is due to the imposed symmtry constraint. However, after switch off symmetry entirely (ISYM=-1), VASP still produce this abnormal value of 0.0 elect*A for centrosymmetric phase.

This abnormal value of 0.0 corresponds to the jump of oxygen atom located at the boundary of the unit cell. Specifically:

since oxygen pseudopotential contains 6 valence electrons, we can easily calculate its ionic dipole moment at centrosymmetric phase should be 24.2 elect * Ang. Since VASP output unit in elect * Ang, we have to account for electrons negative sign, so the ionic polarization @ CENT = -24.2 elect * A

This sill doesn’t solve the mystery.

This is actually a but in VASP, see this post.

After figure out which value is clearly wrong, we can now proceed to calculate total polarization

Exactly the same with

By far, every thing works fine for the periodical system in VASP. The only problem is that the centrosymmetric phase’s ionic part cannot be automatically calculated (or the output cannot be trusted).

There are two way of solving this:

#1.calculate a series of structure points, linear fitting to make sure the “correctness” of the ionic part.

where \(Z_j^{ion}\) is the valence electron number of atom j and \(\tau_j\) is its positions (relative to DIPOL). And substract the centrosymmetric one to the ferroelectric one. The minus sign is to count for the charge sign of electron so that the final ionic contribution is in elect * A.

WARNING The sign convention for the ionic part is very important. If you decided to do the ionic part yourself, please, for the love of god, remember change dot the dipole moment of each structure’s result with a minus sign and ADD it to VASP’s electronic part (so that they are both in elect * A). And remember to flip the sign of the final result (in C/M^2).

So far so good. I am now confident that, at least, VASP’s berryphase routine works correctly on periodical directions.

For 2D system, I choose the nppstr to be 1. This resulting in some error (FFT related). However, counterintuitively, changing nppstr to a larger number gives out correct answer. 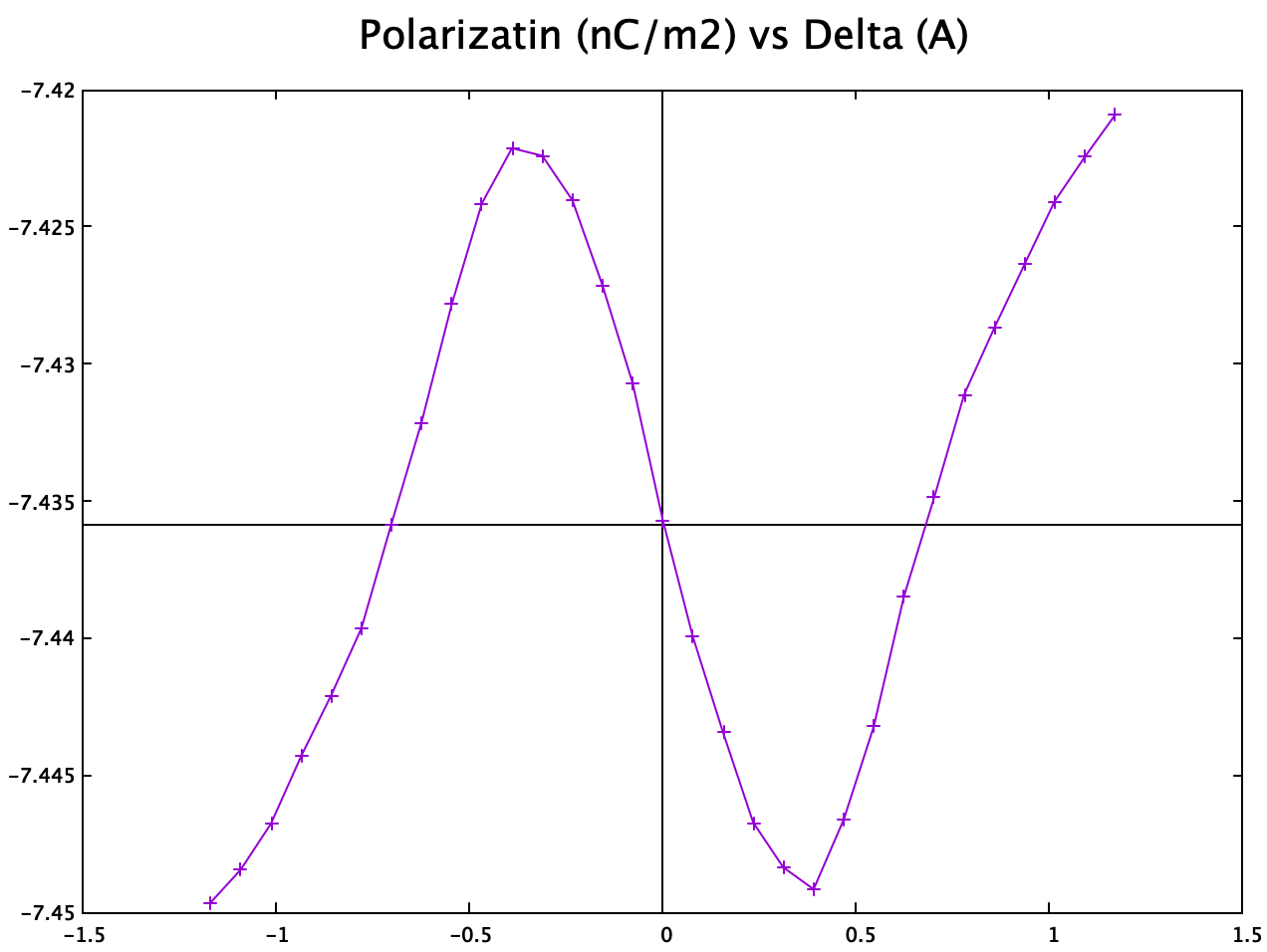 Note that the centrosymmetric phase does not have a polarization value of ZERO. Despite the overall trend of the graph is correct, this still puzzles me.

QE’s example04 strangely did not calculate the polarization of the centrosymmetric phase.

Here, using prototypical BaTiO3 as an example, the total polarization is calculated.

Almost identical to the VASP and experimental value.

Result: QE can be used to calculate total polarization on both periodical and non-periodical directions.

I’ve figured out a way to mimic QE’s occupations = fixed in VASP.

First, do an scf calculation with default number of bands to obtain correct charge density.

Then, using the previous charge density, do an nscf calculatin to obtain berryphase polarization. Note that, we need to excluded any empty bands by fixing the number of bands (NBAND) and occupations.

If the conduction band have minimum overlap with the valence band, simply just change the number of bands to assume a insulator. This usually work for most of the 2D cases if the calculation can be successfully converged.

The results of this procedure are not pretty comparing to the QE and charge center method. 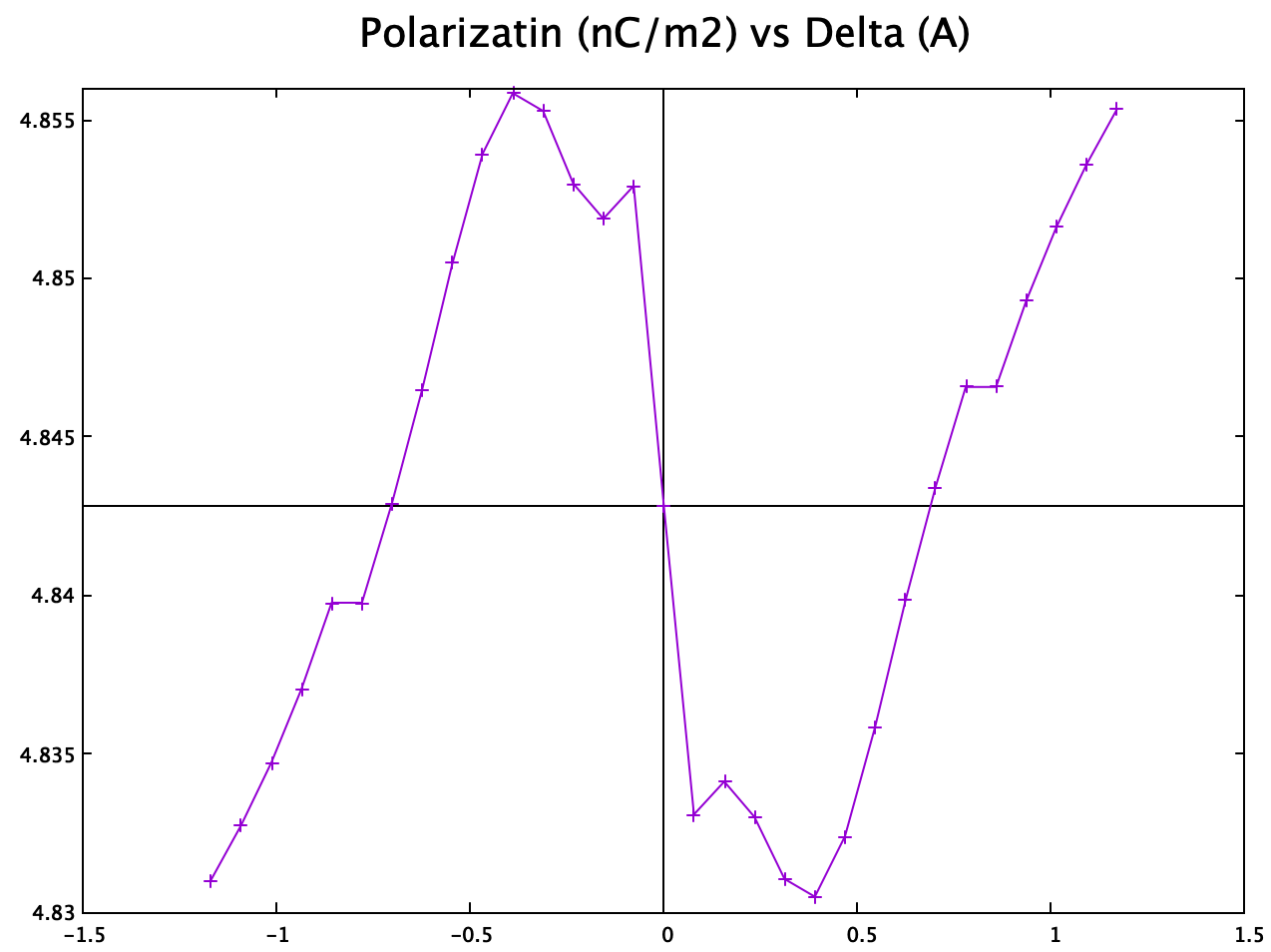 UPDATE-2020-03-15 Q: What if we change the centro-symmetric phase for the NbN? Would this behavior (polarization changes sign without structural flip) be a route dependent??

But, if the total polarization is larger than the max opposite polarization, qualitatively, this phenomena could change with different centro-symmetric reference structure. However, the polarization curve will still have two turning points.